We offer complete operations and management services for every environmental consulting and contracting project, which includes the initial assessment, prioritization of issues and project management. We plan for fiscal accountability, governmental concerns and full environmental compliance and prepare the required compliance reports and regulatory permits in order to complete each project in a timely manner. Northstar Environmental employs state-of-the-art data collection and interpretive methodology and provides extensive documentation tailored to your requirements. Proper documentation and compliance reporting is a standard part of our scope of services.

Our quick response, flexibility and willingness to provide customized solutions has helped us to build an impressive list of satisfied customers within the public and private sector including government agencies, public and private utilities, higher education institutions, and private engineering companies.

Serving the marine community since 1990

In July of 2008, Northstar Environmental Services was contracted by a private client to respond to an emergency hydraulic oil spill remediation that occurred when a series of waste receptacle vehicles had caught fire. During this remediation NES encountered strong odors emanating from a second unrelated source suspected to be gasoline. NES first collected background soil samples for laboratory analyses to determine impacted soil levels requiring remediation based on NJDEP criteria. Soil remediation services were conducted by means of traditional soil excavation activities utilizing specialized dewatering equipment and long reach excavators to remove the soil for proper disposal at a NJDEP licensed facility. The excavation was approximately 74’ long x 44’ wide x 23’ below ground surface (bgs). Groundwater was encountered at approximately 18’ (bgs), with a total of 5,080.12 tons of impacted soil removed and transported for disposal. Also during the excavation activities NSE utilized a dewatering pump, sump and manifold system to remove any residual or free-product encountered during the remedial action activities. A total of 143,340 gallons of impacted groundwater were removed from the subsurface into holding tanks and vacuum trucks. The impacted groundwater was transported by NES to a NJDEP approved recycling facility. After completion of excavation, soil and groundwater samples were taken and submitted for analysis. After soil and water samples were found to meet NJDEP standards the site was backfilled with approximately 5,120 tons of certified clean-fill sand and 700 tons of stone.

Northstar Marine’s Dive services were subcontracted for an environmental test study being done at a closed power plant in Poughkeepsie, NY, located on the Hudson River. When in operation the plant produced a by-product sediment consisting of NAPL (manufactured gas plant coal tar) and aromatic hydrocarbons (PAH’s). This substance had accumulated in the surrounding riverbed and was being released into the water in the form of a slick. As a result, Agate Construction was contracted to lay stone-filled Geo Grid Mats in a 100’x100’ test area. These mats are 32’x20’ and were designed to absorb the coal tar product. Northstar provided all dive services for the project. After rough positioning was done with sonar and marker buoys on the river bottom, the diver entered the water then directed any necessary repositioning using two-way communication. The final positioning was determined once the diver checked and measured to determine the Geo Grid Mat was within given tolerances. The divers used surface supplied air and were working in approximately 60’ of water, in water temperatures between 40-55 degrees, with a visibility of approximately 6”-2’ in currents averaging 1 ½- 5 knots.

Groundwater was pumped from well PW-2 through approximately 2,470 feet of 3-inch diameter HDPE SDR-11 piping to ECB-2. The conveyance piping was connected to each well pump riser using a 1½-inch stainless-steel pitless adapter installed 36 inches below grade. A 1½-inch by 3-inch reducer was installed within two feet of the well. Segments of conveyance pipe were butt-fusion welded.

The conveyance trench was constructed such that the invert of the 3-inch conveyance line was set 36 inches below existing grade. 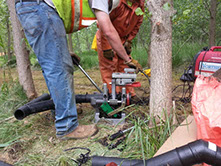 Soils excavated from the trench were staged adjacent to the trench, and reused in backfilling the trench. Excess trench spoils were stockpiled at a designated location on Site. Soils evidencing apparent environmental impacts were placed in a segregated stockpile for subsequent evaluation and disposition.

Conveyance piping was run from PW-2 to ECB-2. A clean-out fitting was installed at the well head and at the ECB to allow for line jetting from either direction. At the ECB, piping installed above 36 inches below grade up to the ECB entrance were heat-traced and insulated to prevent freezing.

NES was contracted to install an Air Sparge (AS) and Soil Vapor Extraction (SVE) system to address residual ground water contamination. NES installed a total of 14 AS wells and 14 SVE wells. Each well location included a valved sample port to allow the Engineer to collect pressure readings at the well head using a hand held instrument. NES completed all trenching to install subsurface piping. SVE piping was 4-inch schedule 40 PVC while AS piping was 2-inch schedule 80 PVC. Any AS piping not buried underground was 2-inch schedule 40 steel. All piping transitioned to flexible piping (rated for vacuum and pressure conditions) with camlock fittings connecting to the hard stub-up piping and the NPT connection on the trailer. NES installed the AS/SVE trailer and carbon vessels in a grass area on a 6-inch layer of compacted DGA stone surrounded by privacy fencing.

The Site was operated as a specialty gas manufacturing plant starting in approximately 1932. Prior to the construction of the gas manufacturing facility, a button manufacturer and a coal and coke supplier reportedly occupied the Site. Most of the manufacturing operations were suspended at the Site in 2002. Operations from 2002 through August 2006 were comprised of transferring certain gases into cylinders and distribution of gas products. The remedial excavation activities addressed removal of chlorinated volatile organic compound (CVOC) DNAPL in two separate locations near the northeast and southeast corners of Building 12.

Sheeting and excavation of the southeastern DNAPL area was limited to a zone between 13 ft. bgs and 20 ft. bgs over an area of approximately 540 ft. The northeastern and southeastern areas of the DNAPL were excavated to depths of approximately 10 ft. bgs and 20 ft. bgs, respectively. The capping activities addressed the historic fill that is found across the Site. The new gravel cap covered all grassy, exposed soil and broken asphalt with the exception of the southwestern area adjacent to the New Jersey Transit tracks.

The following Scope of Work was implemented: